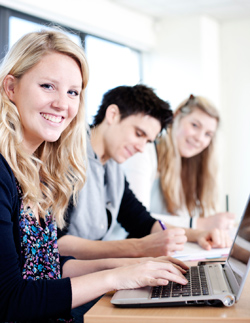 University Liaison visits continue to form an important part of our work. Not only do they establish a useful and constructive point of contact between ARB and the schools/institutions of architecture, but they also raise student awareness of the responsibilities placed on architects, along with an understanding of professional regulation.

We provide workshops on request for students taking prescribed qualifications at all levels. The workshops introduce students to ARB and the professional responsibilities which come with registration, as well as the importance of ensuring good practice and maintaining good standards for the benefit of the public and the profession. The workshops equip students with an understanding of the obligations they must meet once they join the Register, and feedback from the Professional Studies Advisers confirms that the workshops continue to be of high quality in terms of their nature and scope.

We made 45 university liaison visits during 2012. Of these:

ARB is responsible for prescribing (recognising) the qualifications in architecture that an individual must possess to enter the UK Register of Architects. Institutions wishing to renew prescription of existing qualifications or seeking to have their qualifications prescribed for the first time, must present documentary material to demonstrate that key objectives have been or will be met. Meeting the key objectives provides the Board with confidence that, among other things, students obtaining a prescribed qualification will have demonstrated that they have met all of the relevant Criteria. The Criteria set out the minimum standards that a qualification in architecture needs to meet. Once prescription has been granted for the first time or renewed, qualifications are then subject to an annual review to check that the Board’s requirements are continuing to be met.

Whilst the number of annual monitoring submissions and applications to renew prescription has remained relatively stable, we have noted that interest from new institutions seeking to gain prescription of their qualifications for the first time continues to grow. Over the last three years, an average of three new institutions approached us each year with a view to gaining prescription of their qualifications at either Part 1 or at Part 2 level.

Once the relevant qualifications have been prescribed for the first time, we then work to secure their listing under the relevant section of the Mutual Recognition of Professional Qualifications Directive [2005/36/EC] by supporting the institution through the notification process established by the European Commission for this purpose.

ARB is the UK’s competent authority for architects and is responsible for implementing the Directive’s provisions that are relevant to architects.

Last year, we reported on our contribution to the European authorities’ review of the Directive. In 2012, we continued to be actively engaged in the review of the Directive through our relationship with Government and through our membership of the European Network of Competent Authorities in Architecture (ENACA) and the Architects Council of Europe (ACE), as revisions to the legislation were debated by the European Parliament, the Council of Ministers and the European Commission. We also continued to work hard to ensure that the views of the UK’s key stakeholders were made known to the European authorities as debates about amendments to the Directive carried on throughout 2012. Feedback from our stakeholders confirms that our expertise and experience in this area has been valued.

The revisions to the Directive will continue to be debated in early 2013 and we anticipate that agreement between the European authorities will be reached in mid to late 2013. We will continue to disseminate information and work with our key stakeholders in this area to ensure that the transposition of the Directive in all EU Member States is harmonised.

In the UK, ARB scrutinises each qualification notified to the European Commission to ensure it complies with the Directive. During 2012, ARB reviewed 27 European qualifications from seven Member States which are illustrated as follows:

Keeping the UK’s entry under Annex V up to date
The UK notifies ARB-recognised qualifications to the European Commission, both to demonstrate the quality of its qualifications and to build trust and understanding with institutions in other European Member States.

Acting in our role as the UK’s competent authority for architects, we have worked closely with the schools/institutions of architecture to support them in securing the Commission’s listing while their qualifications were scrutinised and, ultimately, approved at European level. In 2012, we secured approval for the listing of one new qualification and seven title changes.

The feedback we’ve received has confirmed that the UK schools/institutions have found our support and assistance in this area to be vital. The schools/institutions have also welcomed our efforts to reduce the need for them to duplicate material which has previously been submitted for the purposes of prescription. Additionally, our European counterparts have reported that they value the clarity we have brought to the notification process, with several adopting the templates we have developed for our UK notifications.